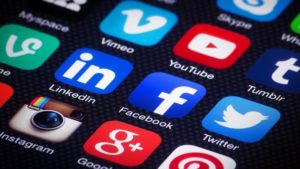 All the platforms where citizens are supposed to use their freedom of expression and ideology have become traps where the expression of all ideas is not allowed. Still, they have been populated by countless intelligence agents from various countries that condition political affairs' perception.

Many studies are analyzing the behavior of social network users. Still, few studies are investigating how some countries' intelligence services manipulate the information with which citizens make their decisions. Democracy, understood as a market where ideas are exposed and exchanged freely, has ceased to make sense since the media are dedicated to perverting truthful information.

Social networks are but an updated version of that perversion. Some studies have found recognizable behavior patterns that allow glimpses of different intelligence services operations in networks. One of these studies has found three fundamental pillars in the war in social networks: social networks, then propaganda, and news and information exchange.

The study suggests that the adaptation of social networks as a modern warfare tool is a consequence of linear logic. Internet technology evolved to meet the needs of information warfare around 2006 with the onset of Web 2.0, allowing Internet users to create content rather than consume information found on the Internet.

For the first time since the mass media began, the individual could decide what information he wanted to consume. The hierarchical and one-way direction of the traditional media had been broken. But the Internet communication revolution allowed users to select what news they wanted to see and allowed them to use the web to create an information based on their opinions.

The world of bloggers has brought a parallel universe of information against the homogeneous version of reality presented by the mass media. The social nature of humans eventually led to the creation of virtual networks. These networks have created a dilemma in which the media is forced to make way for a more personalized communication form. This new form of communication provided by the Internet has quickly returned to its military origins. 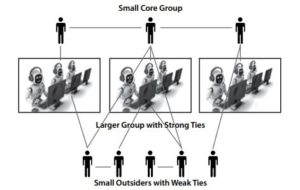 The personalization of Internet information use is already analyzed and influenced by factional and institutional powers, including terrorist groups. This new form of communication is used by state and non-state actors, who use social networks to apply time-tested propaganda techniques to achieve far-reaching results. Social media warfare is merely a new war scenario where different powers are fighting for the influence of an unsuspecting audience that believes it is receiving reliable information from other users.

Actors who want to exploit the use of social media advertising take advantage of an existing narrative, then amplify that message with a network of automatic "bot" accounts to force the social media platform's algorithm to recognize that message as a trending topic. The personal decision about what information is relevant or not is manipulated by a series of propaganda tools applied to the digital environment.

Coercion and persuasion will continue to be decisive factors in the war on social networks as more countries attempt to build operations of influence on social networks. Being a war scenario where there are no significant resources to be invested in compared to other scenarios, it is sensible to think that all countries will develop their social network divisions soon.

Previously, traditional forms of cyber-attacks were directed against states or their institutions. Today, cyber-attacks are directed at people within a society to influence their beliefs and behavior, which is done through social networks. It is a form of political warfare in which the main objective is that people no longer trust their government and no longer have an attachment to the values that govern the society in which they live.

Therefore, rather than attacking the military or economic infrastructure, state and non-state actors can access regular online information flows through social networks to influence networked groups within a particular country.

The article published in Strategic Studies Quarterly analyzes how social networking sites such as Twitter and Facebook use an algorithm to interpret words, phrases, or hashtags to create a list of topics ordered by popularity. It must be recognized that the first battle in the social network war is won by the owners of the social network, who impose censorship for some opinions while leaving freedom and promotion for others.

The owners of the networks themselves divided their users by ideological affinities. With this panorama, the author poses a problem: social networks facilitate networks of like-minded users. How can a war be waged on social networks without access to the enemy who is protected by an insurmountable algorithm? The proposed solution is trending topics.

This "trend list" is a quick way to review the most discussed topics at a given time. Social media, a trending topic, will "capture the attention of a large audience for a short time" and therefore "contribute to the agenda-setting mechanisms." Manipulators can insert propaganda in a social network platform, create a trend, and quickly spread a message more cheaply than through any other media. Using a flow of keywords used by millions of users simultaneously is a perfect way to spread propaganda among users with disparate ideological tendencies. 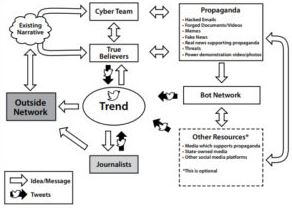 The Algorithm and the Social Media War

With this type of deception of the networks' algorithms, the war in social networks facilitates the diffusion of a narrative outside a particular social group.

For the author, the dynamism is based on four factors: (1) a message that fits an existing narrative, (2) a group of true believers predisposed to the statement, (3) a relatively small team of cyberwarriors, and (4) a network of automated accounts "bots." It is a much smaller logistics than required for an open confrontation, even for a guerrilla operation.

A trending topic can spread a message to a large group outside of a person's social network. Mastering trending topics is a powerful method of disseminating information. Previously, terrorist groups, such as al-Qaeda, preferred to create websites, but now they prefer social networks. The number of users who access a web address is much lower than those who follow a trending social network topic.

On the other hand, the web address is known by a small number of people already faithful to the ideology that is spreading, and the intention is to attract new believers to the cause. Groups trying to spread a message as widely as possible can rely on the trending topic feature to reach the target user across multiple networks.

Manipulative actors who seek to influence a population through trending topics often create a network of bot accounts programmed to tweet at various intervals, respond to certain words, or retweet when directed by a master account. It is not difficult to find online software  programmed to automate the management of various social network accounts, nor is it complicated to enter Artificial Intelligence programmed to simulate being a human person defending one position or another.

AI scans networks for keywords to spread a message, pro or anti. Ultimately, social networks are a weapon of war, and techniques such as search engine optimization and trend mastery will become standard in future conflicts. Manipulating information will aim to make the other side change its course of action; one of the main objectives of information warfare is to alter the enemy's decision making.

The ease of use and the many active and sleeper bots indicate that social media warfare will continue to increase in importance as a warfare scenario. More and more state and non-state organizations realize the impact they can have on an adversary. Social networks are not a seemingly innocent channel of communication, which is precisely why social network opinion is not excluded from psychological warfare operations.