The new communications scenario is not based on data or facts processed from a rational point of view; modern communication is based on the effective dissemination of short touching stories and emotions. These stories are shaping a less informed and much more manipulable public opinion. In a context such as the current one, the damage and undermining of liberal democracy is more significant, so this explains the presence of stronger and more "authoritarian" leaders.

Under the pretext of improving the experience for their users, companies develop algorithms whose functions include determining what will or will not be visible. What you think "everyone says" across all social networks is only said on your wall. An algorithm constructs a distorted public opinion narrative specifically for you. It's not just what you choose to follow what has already betray you. The truth is that the algorithm suggests contents and profiles to you, also send you notifications when your friends or those who you follow have shared something, so you feel impelled to do the same aimed to feel part of the mass. This behavior is done uncritically because, somehow, the approval of others is rewarded through social networks that reinforce the idea of a judge-like feeling. However, after all, we are rather police or keepers than judges, because the masses do not construct their opinion: opinion is given to them already built. Insistent repetition, conditioning, and the environmental conditions in which our intelligence and our relationships are organized do the rest.

Hence "the stick and the carrot strategy" comes up. The carrot, or positive reinforcement, urges us to continue sharing personal information and accepting new ideas as ours, aimed to gain the approval of the "world." The stick plays the role of "the enemy," the other, who wants to harm us and even provoke us, be it an individual, a collective, a nation or a segment of the population. For example, it has been observed that negative emotions lead to stronger online action trends than positive emotions; therefore, some algorithms end up prioritizing contents and comments that provoke reactions of anger or hatred.  The "stick and the carrot team" contributes to radicalize positions and to sharpen pre-existing antagonisms in society. In short, they are turning us into resentful, sad, frightened, unempathetic, isolated and trivial people; too similar to the dogs of Pavlov or the experiment of the little Albert, by Watson. 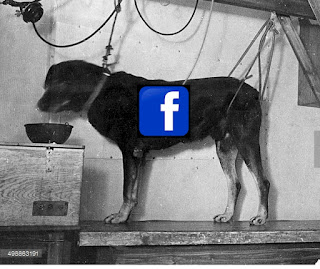 It is about creating a hegemony from the supposed objective and perceptible reality of an audience that lives in an omniscient illusion. The reality of a society that, on the other hand, neither investigates nor reads and just follows the herd. In truth, we are before an informative product that is transformed and designed to drive us to a particular knowledge. Consuming that transformed information, we assume that what we see on the mobile, the computer, the television, or whichever screen that broadcast transformed information, is the only objective reality. Due to the speed with which new publications or comments appear to reinforce or challenge us, we lose the possibility of using critical reasoning.

This situation drives us directly to the so-called last two industrial revolutions, i.e., the first crystallized in computing and the Internet, also name 3.0. The second revolutions is the one we are in right now, and  has as its flagships the A.I and the big data.

But to speak of an industrial revolution, the following factors must necessarily be given:

As Professor Robert Gordon explains in "The Rise and Fall of American Growth," the technological revolution has not led to a considerable increase in productivity. 1987 Nobel Laureate in Economics Robert Solow said "The age of computers is seen everywhere except in productivity statistics.

Today, revolutions 3.0 and 4.0, yet to come, have generated the following effects:

Modern revolutions have been fundamental for the displacement of productive capitalism in favor of financial capitalism. Financial Capitalism has been hypertrophied led by the computing and information revolution because it generates models and algorithms that allow more significant and better predation systems on the real economy. New models and algorithms increasingly complex financial products, create financial bubbles that when blast, the effects are absorbed by the next bubble, of even larger size. New models have created the exploitation of the structure of tax havens created by the City of London since the fall of the British Empire (and copied for the United States), have create the arms trade, drug trafficking (and the increase in addiction to narcotic substances in which we are immersed), and the actions taken of both corruption and diversion of profits resulting from neo-colonialism centered on the sources of energy, strategic minerals and natural resources.

On the political level, all this has translated in representation problems in political forces, in unions, etc ... and the increasingly evident presence of what the Sheldon Wolin called Inverted Totalitarianism. This concept refers to the combination of a weak legislative body (a legal apparatus that is both complacent and repressive), and a system of parties in which each of them (in government or opposition) is focused on maintaining the existing system to favor a ruling class composed of the rich and powerful. And it is in this sense that computing and information also influence, since it supports the management of information generate d by billions of people; it is easier to direct messages and induce ideas in the mass to control speeches that can be potentially dangerous for those on the cusp.

2 thoughts on “BIAS APPLIED TO SOCIAL NETWORKS AND INVERTED TOTALITARIANISM”